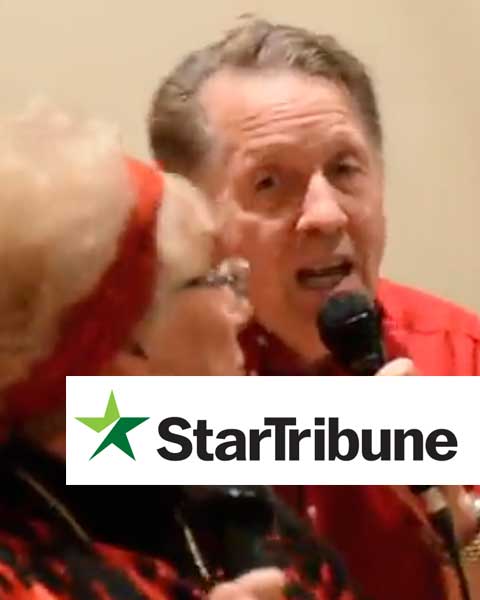 These senior citizens have decided that they are going to sing while they still have the chance.

The singers were having trouble finding their notes at the beginning of U2’s “In the Name of Love.” The conga drum introduction threw them off, they groused. Could the keyboard maybe play the first chord to give the pitch?

“I don’t care,” Ferrell said. “You’re going to have to find those pitches.”

Like schoolchildren chastened, the 22 singers of Alive & Kickin’ set aside their canes, stood up to the microphones and gave it another try. They garbled the melody and lyrics of the first verse but when it came time for the familiar anthemic chorus, the singers hit each note with sure-footed gusto:

Bono himself would have shed a tear.

“It wasn’t our best, but we had really good energy,” Ferrell said as the song ended.

Good energy is what this group is all about. Ferrell, inspired by “Young at Heart,” a 2007 documentary about oldsters who covered pop songs in concert, created Alive & Kickin’ two years ago. He collected 25 singers from age 63 and up (two missed a recent rehearsal because of vacation; Cal Sathre, at 94 the oldest, had a doctor’s appointment).

The group, which sings at nursing homes, senior and community centers, opens two weekends of public concerts Friday at Old Arizona in Minneapolis. Last year, they sold out one weekend. Ferrell rehearses them once a week but after 10 months, the lyrics and notes aren’t always automatic.

On a recent Monday, Ferrell had his senior choir shuffling and singing their way through U2, Queen, the Bee Gees and Foreigner in an Edina church basement.

“All right, we’re going to start with ‘Love Is Alive’ and then go right into the ‘Love Rap,’ he announced. ‘Beat boxers, I need you to get gangster on those microphones!'”

Norma Garfin, 75, limped on her walking cast but she was getting jiggy, spitting out the rhythm. Ferrell at one point stopped Pat Faunce, who was leading the rap, to get her microphone closer to her face.

“Now I can’t remember where I was,” Faunce said after the interruption. “I’m just trying to remember my words.”

Ferrell is a taskmaster. “He’s always yelling at us,” said Mary Ponthan of St. Louis Park with a smile.

“C’mon guys, tell me the story; let me hear the story!” he shouts as the choir bursts into that youthful, hopeful Partridge Family proclamation:

“Heeeeeyyyyyyyy, I think I love you; so what am I so afraid of? I’m afraid that I’m not sure of; a love there is no cure for.”

If virtuosity were the goal, Ferrell wouldn’t waste his breath. An award-winning choreographer and dancer who has worked with Chanhassen Dinner Theatres, Children’s Theatre Company and Theater Latté Da among others, he is motivated by a sense of mission and the astonishing spirit of his chorus.

“It is 100 percent raw and it’s honest and unpredictable,” Ferrell said. “They put aside their beliefs about what they should be doing at this time of their lives, and some of them shouldn’t even be here.”

In 2006, Sowden was told he had four weeks to live. After being treated for lymphoma, his heart had failed because of chemical poisoning. He was fitted with a heart pump, which he has worn for six years.
And there he was, fronting the group during rehearsal of Foreigner’s 1980s power ballad and giving full voice to the chorus:

“I wanna know what love is; I want you to show me.”

Sowden and his wife, Diane, could tell stories all afternoon about their amateur and professional theater experiences back to 1952. And as confident as Bill Sowden sounds in rehearsal, he notes that he’s being treated for his third bout of melanoma.

“Oh, this is a cinch,” Diane said. “He used to have bleeding ulcers, and he once took two pints of blood on Friday, sang on Saturday at a wedding and then took more blood the next day. He’s a showman first and last.”

Bill looked over at Diane and said softly, “That’s so sweet.”Finding life in a song

Four weeks after Ferrell got his group off the ground, he got an inquiry for a performance. That under-rehearsed show was “a disaster,” he said.

Nonetheless, someone who had seen the show called Ferrell and said, “You guys were brilliant.”

Soon Ferrell was receiving more requests for performances than he could handle. He asked Linda Reave Rein of Minnetonka, one of his singers, if she’d help out as managing director — not that he could pay her. Rein, who worked in community theater in her 20s and then moved on to raising a family for most of her life, was happy to pitch in.
At 63, Rein is the baby of the group. She is also, perhaps, the most fragile. Last Christmas, she was in the hospital with a recurrence of ovarian cancer, which had spread to her intestines. Doctors put her on feeding tubes and suggested hospice.

“That was the closest situation where I thought I was going to lose one of my singers,” said Ferrell. “The doctors said they didn’t know what else they could try, and they weren’t sure she was going to be released.”
There is no illusion or miracle here. Rein, who is taking chemotherapy, knows how precarious her situation is. The knowledge freights her solo on Queen’s “Someone to Love.”

“Each morning I get up, I die a little; can barely stand on my feet; take a look in the mirror and cry; Lord what you’re doing to me. I have spent all my years in believing you; But I just can’t get no relief, Lord!”
Ferrell, visibly moved as he’s chatting with a reporter outside the church after rehearsal, says this venture has been like nothing he has ever done.

“I’m a pretty tough guy,” he says, “but there is something hearing Linda sing those words. I well up. It just happens to me. It’s that real and honest.”

Rein, who still speaks with the joy of a teenager, finds Alive & Kickin’ a crucial part of her existence.

“We absorb his energy,” she said of Ferrell. “It makes you feel young and healthy to do this.”

Do what you want to do

And what about Catherine Antil of Edina, that singer who had suggested it would be OK to get the pitch on the U2 song? After rehearsal, she showed a reporter photos of last year’s public performance. She was wearing a special necklace.

“It’s made with all the glass eyes I’ve had,” she said. “I lost my eye when I was 8 years old and I had a friend who worked for a taxidermist and she said, ‘I can make a necklace from those.'”

There are 11 glass eyes in the necklace, reflecting the 80 years Antil has lived since the childhood accident.

“My oldest and my youngest daughters said ‘Mother, you can’t do that, it’s too spooky.’ But my middle daughter said ‘

There is a freedom of expression that inspires a person who has nothing left to prove in life. It doesn’t matter whether the singers of Alive & Kickin’ are kicking well. It only matters that they are still kicking.

Back To In The Media